Laura P. Crabtree December 17, 2017
With the launch on Tuesday of BlackBerry’s third BlackBerry 10 device, the BlackBerry Q5, in the Indian market, the company also made an announcement regarding the rollout of voice over BBM (BlackBerry Messenger) on its older devices.

Intent to reiterate its commitment to devices running older versions of its operating system, BlackBerry announced that the update to its BlackBerry Messenger app, BBM 7 which adds BBM Voice, is now available for devices running OS 5.0, OS 6.0 and OS 7.0.

BlackBerry launched BBM Voice on BlackBerry OS 6.0 and later devices in December 2012 and promised that it would update BBM for BlackBerry OS 5 customers in early 2013 by bringing the Voice functionality.

Some of the other features added to BBM 7 are split screen multitasking. With this new feature, users can check BBM text chats, emails or even browse other apps while on a call. Another feature added with the new BBM 7 is that BBM users can check when a contact is available for voice chat. The new version also adds BlackBerry ID Integration which is optional and simplifies operating system and device upgrades. A BlackBerry ID is required for BBM Voice and can be configured when upgrading the app. The data will also be transferred when a user upgrades to BlackBerry 10. The updated version of BBM 7 can be downloaded from BlackBerry World.

With the update, BlackBerry wants to give users of its existing budget devices a reason to stick with the brand.

Meanwhile, the company has extended its BlackBerry 10 ecosystem with the Tuesday launch of BlackBerry Q5 in India, which is priced at Rs. 24,990.

The Q5 has a 3.1-inch IPS LCD touchscreen, much like the Q10. It is powered by a Qualcomm Snapdragon S4 dual-core 1.2 GHz processor with 2 GB of RAM. The smartphone packs 8 GB of internal storage, which can be expanded up to 32 GB via a microSD card. The phone sports a 5.0 megapixel rear camera and a 2.0 megapixel front camera. The Q5 also comes with a 2,180mAh battery. It will be available in three colors: black, pure white and pure red and pink. 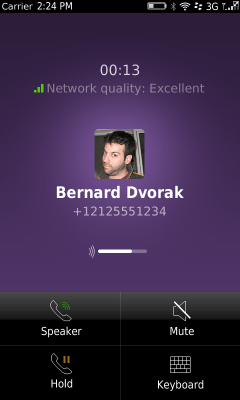